Relocalization and new cultures of work

Before the pandemic, Americans had been working longer hours, on average, for less in terms of real wages. Following the recession, many asked what all this work was for—whether the roles they’d been trained to compete for weren’t actually just “bullshit jobs.”

Then came coronavirus, laying bare the iniquities of our capitalist system. “Essential workers” were pushed to new limits, while others abruptly faced confirmation that their work was, in fact, quite superfluous to society’s needs.

Disillusionment with America’s dominant culture of work is especially acute among Millennials and Gen Z. Despite what we may have been taught, our economy is clearly not designed to help people or the planet flourish. The cost of living rises, wildfires rage, and supply chains stumble— all while corporate profits have soared.

Facing deep systemic injustices and the mounting climate crisis, 2020 even offered a glimpse of how “business as usual” could be shifted. Yet neither corporate employers nor the Federal Government appear willing to lead in redirecting American labor and resources away from profit-accumulation toward the purposeful work of decarbonization, care and resiliency.

How can we advance such a transition when national institutions are unwilling? And how can such a sea-change be made to uphold justice and unleash human flourishing?

At the Schumacher Center for a New Economics in Egremont, MA, our work is to envision a just and regenerative economy and apply these concepts at the local level. The Center actively models tools for community-led change, such as innovative land trust and local currency initiatives, which aim to bring decisions about land use and money issue back to a more human-scale while fostering greater local exchange and production.

Through my work at the Center and greater proximity to other regional initiatives, I’ve come to understand how relocalization can go hand-in-hand with Schumacher’s concept of “Good Work”: the provocative notion that work should “ennoble the product as well as the worker.” Beyond the mainstream, the work of local regeneration is being led by agro-ecological farmers, natural textile practitioners, community solar organizers, small-scale manufacturers, and others pioneering gentler ways of satisfying human needs. By inviting others around them to practical action, these initiatives tend to augment communities’ own sense of economic agency.

The role of community in the groundwork of economic transition is crucial. Tools exist at the local level to cut out extractive intermediaries and ease dependence on under-cutting employers—for example, BerkShares local currency, highlighted at the Rooted Resources festival and which the Schumacher Center has helped develop. Greater regional provision of basic goods and services raises communities’ power to reject the scarcity capitalism imposes. While building economic sovereignty from the bottom-up, relocalization can actively model an alternative culture of work: one rooted in conviviality, ample leisure and collective well-being, and where people and planet actually matter.

Jared Spears works as Director of Communications + Resources at the Schumacher Center for a New Economics. A writer and communications strategist, he is committed to work which advances collective solutions to the climate crisis and to a new political economy. Jared’s writing on culture, work and ecology have appeared with It’s Freezing in LA!, Public Seminar, Futures of Work, and Yes! magazine, among others.

Image: “Ecotopia”, a cover illustration for an issue of RAIN Magazine from the 1970s. 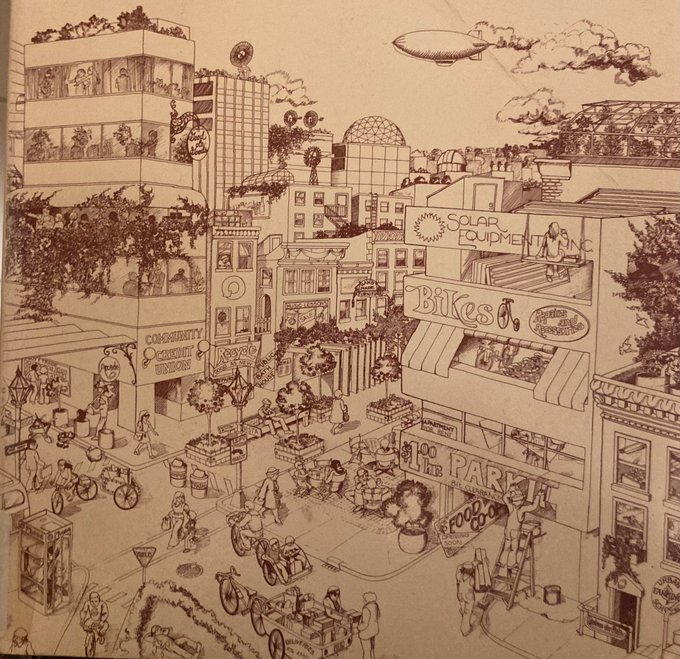