The Rooted Resources Property as Wealth panel began with each panelist talking a little bit about their work in relationship to property ownership, and this flowed into an organic conversation with some questions from the audience. What follows is a summary of the discussion, as experienced by the author.

Christa Hines, Executive Director of Hudson River Housing, kicked off the panel by asserting that housing alone is not enough to address the housing crisis. Coaching and mentorship are also needed to help people seeking to become homeowners. Additionally, homelessness is on the rise. As evidence of this, Hudson River Housing receives 100 applications per month from people seeking support, and roughly half of these people are homeless. Hudson River Housing uses government grants to help subsidize the cost of housing for the people they support, but there remains a big gap between the amount of available subsidies and the high cost of housing.

Shaniqua Bowden, Director of Cultural Engagement and Sustainable Living at Kingston Land Trust, works to protect socially and environmentally significant land. In particular, her project “Land in Black Hands” celebrates Black farmers and their tenacity through a network of shared resources and support. In the early 20th century, Black land ownership was at its height. But as Shaniqua explains, white people in the dominant class felt threatened by the growing power of Black farmers and, as a result, Black land ownership was systematically undermined. Shaniqua states that in New York today, less than 1% of land is owned by Black folks. Currently, Kingston Land Trust is working in collaboration with RUPCO to form a community land trust that would lead to permanently affordable housing.

Kevin O’Connor, CEO of RUPCO, speaks about housing as a form of investment and acknowledges that systemic discrimination has traditionally kept Black people locked out of home ownership. He argues that the financial strategy of treating housing as an investment and the proliferation of REITs (real estate investment trusts) have fundamentally altered the investment ecosystem. Developers are buying up housing complexes, raising rents, and flipping properties for big profits. Short-term rentals (such as AirBnBs) are also shrinking available properties for longer term residents. Too-restrictive zoning makes it challenging to build new homes and increase housing inventory. Additionally, shrinking household sizes are exacerbating housing problems. Kevin says housing has always been difficult in this area, but right now the difficulties are off the charts and there are severe systemic problems in the housing sector in the Hudson Valley. Kevin says we need magic wands to help solve these problems.

Omari Washington, a former board member of the Kingston City Land Bank, underscores the idea that there just isn’t enough adequate housing in this area. Omari moved to Kingston 6 years ago and joined the Kingston City Land Bank soon thereafter. He explains that 26 land banks were created throughout New York when the state sued mortgage companies over fraudulent foreclosures. The goal of the Kingston City Land Bank is to create affordable housing for people whose earnings fall between 60-80% of the local median income. He admits that the land bank system is hard to navigate for people seeking housing, particularly for those who are already housing insecure. Additionally, some of the houses that end up in the land bank are in need of renovation, which can be quite expensive. At one point, the Kingston City Land Bank had funding to renovate five homes in their land bank and, with the goal of keeping these homes affordable, they ended up selling the houses for less than the cost of the renovations. He admits that this is not a sustainable model.

Shaniqua points out that the terminology in these discussions can get confusing quickly, because in this conversation alone there are three separate organizational entities with very similar-sounding names: Kingston Land Trust, Kingston City Land Bank, and a yet-to-be-formalized community land trust in the Kingston area.

Shaniqua says that ideally community land trusts ought to be created “by the people, for the people” – though, in reality, this is challenging. People who are housing insecure don’t necessarily have the time or bandwidth to develop the skills and knowledge needed for this kind of complex organizational, institutional, and legal undertaking. A community land trust organization in Kingston is still in early, formative stages. Currently, Kingston Land Trust is teaming up with RUPCO on this project, and also consulting with community land trust experts from other regions. They are meeting weekly, talking to other community land trusts, and “learning along the way.”

Kevin also points out that one of the biggest obstacles to establishing a community land trust is that many banks issuing mortgages to homeowners aren’t yet familiar with the land trust model. Banks have to be included in the learning process too. He feels confident that the banks will want to get on board once they understand the details of the land trust model.

Someone in the audience asks whether there are any efforts underway to move away from the system of “property as investment”, since this seems to be a fundamental problem. Do we have to dismantle capitalism to create real change?

Shaniqua also points out that for community land trusts to function effectively, there are issues with local tax policy and property assessment that have to be resolved.

Krista mentions that Grounded Solutions has some great resources on their website related to community land trusts and shared equity.

Someone in the audience mentions that there is federal legislation in the works (a bill not yet passed) to create more support for community land trusts and that it might be a good time to call your representatives.

Kevin responds by proposing that the community land trust model can also be used to create rental properties with affordable, stabilized rental prices. Some discussion ensues about the importance of supporting private landlords with small holdings of properties. RUPCO is working on this.

An audience member asks about the specific ratio of home owner equity to community land trust equity, and Kevin explains that it really varies from one community land trust to the next. But the overall goal of a community land trust is to create an ecosystem of more affordable housing. He mentions that these types of programs, as well as co-housing projects, are much more common and more established on the West Coast of the United States. The Hudson Valley is still catching up with these ideas.

The discussion winds to a close with a comment from the audience about the importance of land ownership for BIPOC communities. This person points out that often land benefactors will offer opportunities for BIPOC “stewards” of the land, without ever offering them ownership of the land itself. As stewards, BIPOC thus improve the land for the next generation of already-privileged land owners, instead of creating new generational wealth for BIPOC families.

Shaniqua acknowledges it’s a complicated discussion. Large parcels of land are often held in trust by families whose members might disagree about how to use that land. (Though this was not mentioned during the panel, it’s important to note that “old money” family ownership of large parcels of land is not a typical community land trust model.) Shaniqua offers that with the “Land in Black Hands” program, there is a growing network of people and resources for continuing these discussions. Anyone who is interested can join the conversation.

It’s all a work in progress.

Fiona Otway is a documentary filmmaker based in the Hudson Valley. 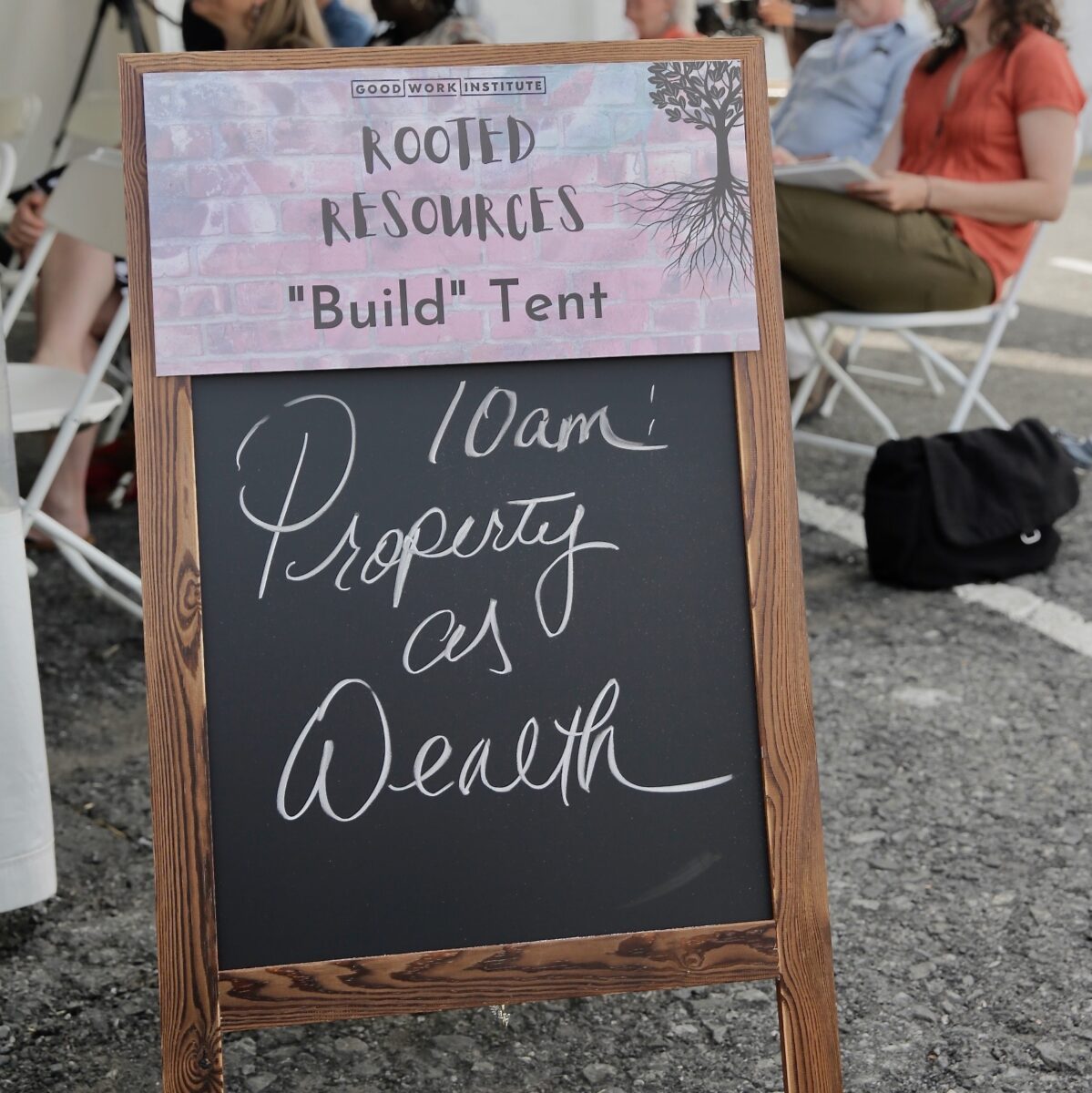