Set Down Those Bags

by Aja Schmeltz, with Micah

1. The branch of mechanics concerned with the motion of bodies under the action of forces.

2. The forces or properties which stimulate growth, development, or change within a system or process

Transition does not happen without discomfort. As Good Work Institute (GWI) navigated the transition from a traditional nonprofit structure to a worker self-directed nonprofit, it started to become apparent to us that there were some internal dynamics that needed to be acknowledged and addressed. We had already experienced significant, rapid change to our staff configuration multiple times and were diligently laying the groundwork for becoming a full-fledged shared leadership organization. But over time, we began noticing tensions rising. Some of that tension was not voiced. Some of that tension came from us simply not knowing each other very well (our personalities, our working styles, etc.). Some of that tension did not seem to have an obvious cause. Some of that tension was subtle and some of it was not so subtle. Conversations around some of these tensions started happening, but, generally, not as a full team. Again, transition does not happen without discomfort. We knew that in order for us to be successful externally, we needed to be successful internally.

So in the Fall of 2019, shortly after we hired our sixth Worker Trustee, we made the decision to formally address these tensions. We met as a General Circle and decided that we would convene a sub-circle tasked with outlining a process for a “Dynamics Reset”. That sub-circle had two members, Susan and me (Aja). After several conversations, we honed in on what we ultimately wanted to achieve with this process and decided that the outcomes would be to name and try to put down baggage from the past that we may still be carrying, and support ourselves to reset, individually and collectively so that we could do our work in the context of trust and equity. We also recognized that we all were eager to gain more experience having difficult conversations, processing tension and engaging conflict so that we could strengthen our internal practice for the future. Once we defined our initial desired outcomes, we put together a proposal, presented it to the General Circle and asked for input. We all consented to the proposal and made the decision to enlist the guidance of an outside facilitator.

We knew this work would require someone with a unique skill set to hold this space. We wanted a facilitator who would:

We compiled a list of several prospects and began interviewing. After careful consideration, we chose Nicole Bauman. Nicole is a white, middle class, queer, genderqueer, farmer/healer/ facilitator/movement builder and parent, rooted in community and organizing. Somatics and NVC have been empowering tools for Nicole’s own personal healing and transformation, and have also increased her capacity to show up more skillfully to communication, conflict and collaboration interpersonally and within the movement. Nicole’s embodiment and teaching of this work is deeply shaped and informed by her own parenting journey, as well as years of work as a birth doula and yoga teacher, and a decade of living in an intentional community. Nicole is also practicing to be a Certified Healing-Centered Coach.

Susan & I met with Nicole several times to give context, share our desired outcomes, design a framework, and outline a timeline. Once all of that was secured, it was time for our full team to begin this journey. We set times for Nicole to meet with each of us so she could have a better understanding of where we were collectively from the perspective of each of us individually. Shortly after the one-on-ones were conducted, we met as a General Circle and a member of our team had indicated that there was some discomfort with the timeline. There were some lingering questions about the structure, and some more spaciousness was requested in order to move forward in the best way. We decided that we would take a pause. During this time, two types of dynamics were revealed. One type was structural, i.e. the way unequal societal power structures play out in our working relationships. The other type was interpersonal dynamics in which differences in work and communication styles create tensions. These two operate in conjunction with each other, having to do with voice, influence, and choices in the moment of how we exercise each, moving up and moving back.

During the pause, Susan and I met as a sub-circle and then together with Nicole to amend our initial proposal and framework and to outline a restart of the Dynamics Reset process, which would roll out in two new phases. Phase Two would be more concrete and Phase Three would be emergent. For Phase Two, we decided that everyone would have one-on-one phone calls with Nicole to reconnect, process anything that had come up regarding pausing the Dynamics Reset process, review the amended proposal, and check on everyone’s willingness to engage in future conversations. Nicole then recommended that we meet in certain dyads and triads (facilitated by Nicole) to discuss themes and dynamics that came up in the most recent one-on-ones. We also met in caucuses, the POC Caucus and the White Caucus. Some of the themes that emerged were structural power, organizational structure and relationality. During Phase Three, the full team met in-person, with Nicole facilitating, to discuss these themes, give everyone an opportunity to be heard for any impact or experience that wasn’t tended to during Phase Two, name learnings, patterns, take-aways, etc.. We also reflected on celebrations, places of healing and/or transformation, and explored our next steps. This was an entire day filled with all of the emotions.

Personally, I found that the conversations that I was a part of in Phase Two and Phase Three were some of the most transformative and cathartic I have ever had. From start to finish, this process took six months. It was enlightening, it was frustrating, it was generative, it was difficult and it was inspiring. This process allowed me to be open and honest, not just with myself, but with my co-Workers in a way that I was not comfortable allowing myself to be in the past. So much healing was done during this time that really allowed us to collectively grow and fortify our working relationships. I would be remiss if I did not credit Nicole with the care that she held us all with. Not only did she do an amazing job with creating safe space, she created courageous space. She took me well beyond my comfort levels and encouraged each of us to actively listen to our partners. Transition does not happen without discomfort and transitions are inevitable.

I am so grateful to be a part of a team that acknowledges the need for this internal work, for making space for this work to happen, and for allowing it to take whatever shape needed for it to be the most impactful. 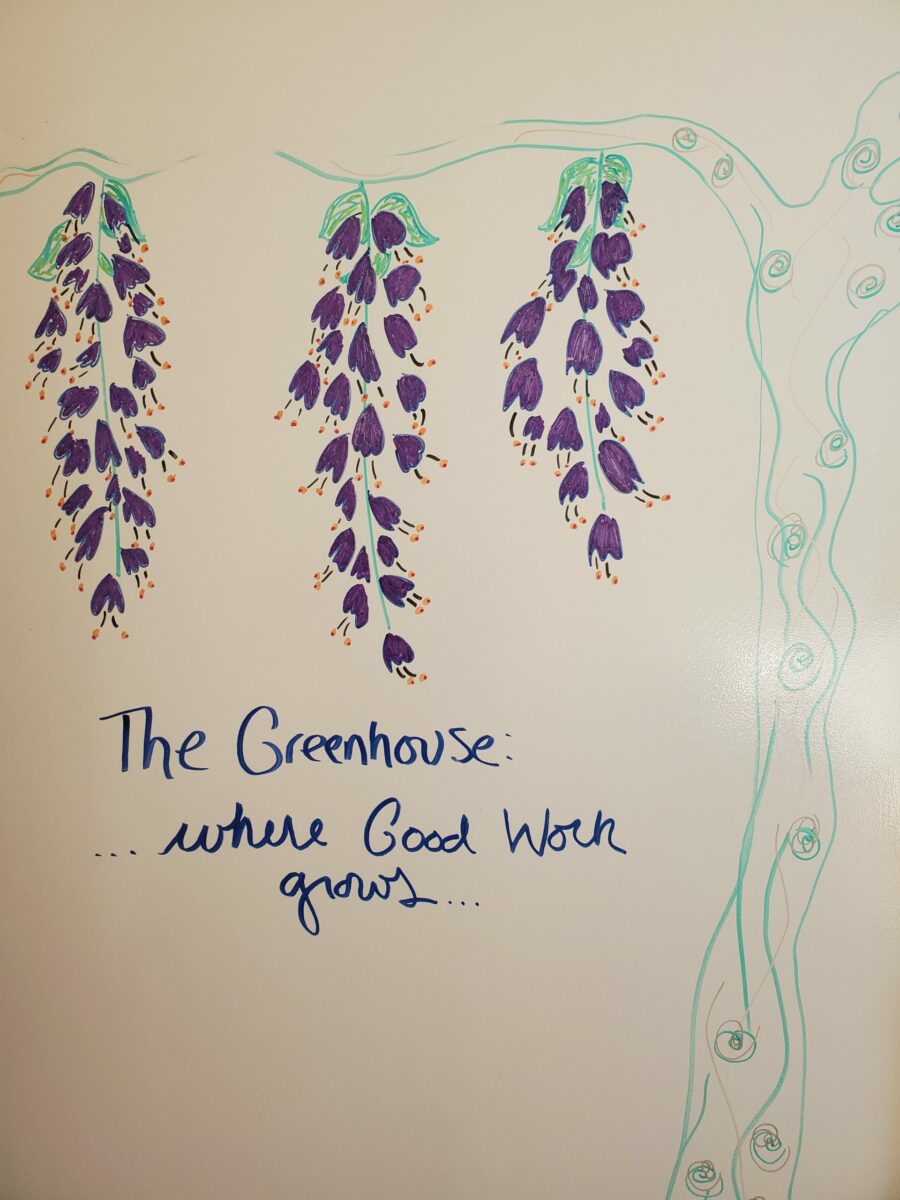