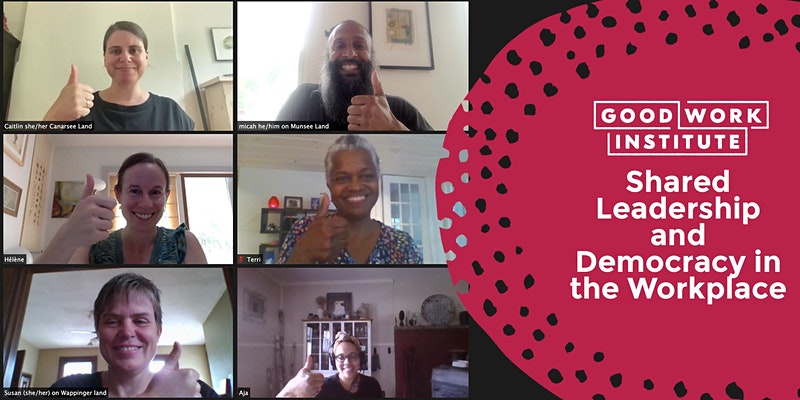 We request that  participants attend all three workshops.

REGISTER
Shared Leadership and Democracy in the Workplace (2 of 3)

Join GWI as we explore the tools, policies, practices, and culture of shared leadership and democratic decision making.

In 2019, the GWI team made the collective decision to move from a hierarchical organization to a Worker Self Directed Nonprofit. Together, we built a system of shared governance and leadership that serves the needs of our organization while honoring our unique talents as individuals.

In this three part series, we will get into the nuts and bolts of how to implement democratic decision making, and discuss broader relational shifts that facilitate a culture of shared leadership. Throughout the series, we will explore the broader context of shared leadership applicable to different types of organizations, both for- and non-profit, as well use GWI’s transition as a case study to explore how we can bring democratic values into the way we work and build deeper connections to our impact, purpose, and each other. Rather than provide a specific template approach, this series is designed to support participating organizations to see opportunities to evolve their own structure and processes. Together, we will explore:

We request that participating organizations send a minimum of two workers,and that participants attend all three workshops. Shared leadership is a collaborative practice, and we believe that the more workers present, the easier it will be for an organization to engage with this work. Our recommended best practice is to send a delegation of workers that represent different professional backgrounds and different levels of authority within the organization.

Angela DeFelice (she/her) grew up in a rural, working class community in Western NY, and for the last 11 years has lived in and around Poughkeepsie (Mohican-Munsee Lenape land). Her journey into the cooperative ecosystem began as co-founder and worker owner of Rock Steady Farm, a women and queer led farm. Angela is excited by the power-building potential of community and worker ownership, and brings this energy to her current work as Project Officer with Co-op Hudson Valley.

Micah (he/him) is of mixed race (black and white) and mixed religion, and grew up in two different socio-economic homes. He is a Worker Trustee of the Good Work Institute and is a member of the Academy, Development, Fiscal Sponsorship, Greenhouse, Learning and Network Circles. He is a cisgendered, working/middle class parent of two living on Munsee/Lenape land in the Mahicantuck Valley, commonly referred today as Kingston, NY, working to prove possibility and to liberate the imagination in order to see a Just Transition.

Caitlin Dourmashkin (she/her) is a white, middle class, cisgendered parent living in Brooklyn, NY (Canarsie-Munsee-Lenape land). She is a Worker Trustee of the Good Work Institute, Steward of our Operations Circle, and a member of the Fiscal Sponsorship, Greenhouse, and Learning Circles. For Caitlin, the transition from hierarchy to shared leadership was an eye-opening experience, representing a shift away from the often extractive practices of business-as-usual ways of working. She is committed to using the language of operations to illuminate the ways that shared leadership can lead to more productive, impactful, and personally fulfilling work and working relationships.

We have a limited number of spots available for this workshop, depending on the number of organizations and workers per organization that sign up. If you are interested we ask that you sign up as soon as possible. We will close registration no later than August 25th, possibly sooner based on the number of worker signups.

Ticket prices (see Fee below) are per organization, and you are able to register up to five workers for each ticket. We request that each participating organization register at least two workers, and that participating workers come from diverse professional backgrounds and levels of authority within the organization. This is a multi-session workshop and we expect all participants to attend all three sessions. Once you complete the ticket purchase, we will send you a registration form where you can sign up multiple workers from your organization.

The fee for this workshop is on a sliding scale, determined by the annual budget of your organization. Each ticket includes registration for up to 5 workers. We request that at least two workers from your organization participate, and recommend registering as many workers as are available to participate.

If the low end of the sliding scale is still out of reach, we have a limited number of scholarships available. To apply, email Micah at micah@goodworkinstitute.org.